I recently went to the UK and came back with these. A Birmingham made Melody Major Mandolin Banjo dated about 1920 and a London made J.G.Winder Mandolin dated 1896.

They had belonged to my late uncle and I remember playing them as a youngster and when I mentioned them to my cousin she said her daughter had them, had unsuccessfully tried to sell them and they were kicking around in a shed. I went to see them and the mandolin banjo was presented to me in a hard case, dripping with water and supposed black but white with mould. I feared the worst and opened it with some trepidation....... the neck was adrift, but only unglued, the strings rusted away, but the skin was good. I threw away the case and have repaired the neck and the wooden back which was also coming unglued.

The mandolin was in better condition although there was a split down the front and most of the frets were longer than the width of the neck, again a bit of gluing and plenty of lemon oil on the neck and untreated front face of the instrument. Some of the frets had to be trimmed and the hard case is at a local cobbler being re-stitched.

I also got a violin but that is still with my sister in the UK as I could not get it in my suitcases. 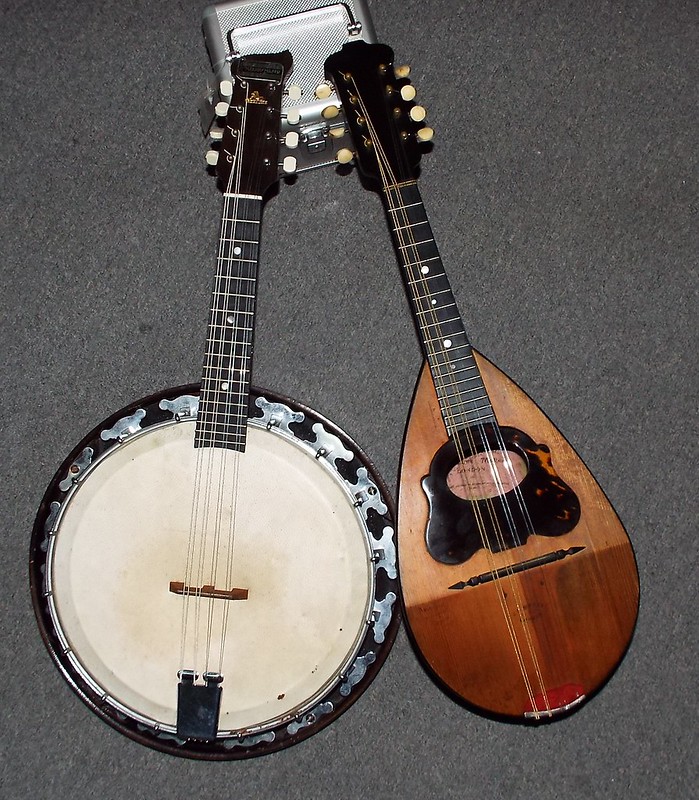 Very cool. It's good that you know how to repair them.

Congrats, Now are you going to play them ?  I always like it when someone brings old treasures back to life.

Beautiful treasures! It is wonderful that you have them and can enjoy the memories and craftsmanship in them.

Live in the "now" - a contentment of the moment - the past is gone - the future doesn't exist - all we ever really have is now and it's always "now".

Both look cool,hope you can get them repaired and play them.

Beautiful treasures! It is wonderful that you have them and can enjoy the memories and craftsmanship in them.