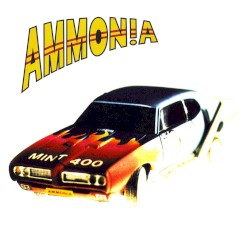 An alternative rock band from Australia, Ammonia made a name for themselves in the 1990s, producing a mixture of grunge and guitar pop (a sound they described as ’pop-metal’). The group began in 1992, initially comprising guitarist Dave Johnstone (ex Hideous Goldsteins), drummer Alan Balmont (ex Dear Octopus, Cherrytones) and bass player Phil Natt. This line up performed under the name Fuzzswirl, and following departure of Natt, continued to perform with a variety of bass players around their hometown of Perth. It was not until 1993 when bassist Simon Hensworth joined the group that the name was changed to Ammonia. The band was considering the name "Glorious Noise Earthquake", but selected Ammonia for its simplicity after Hensworth stumbled across the word in a science textbook.