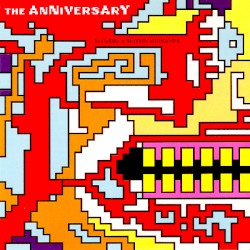 The Anniversary is an American band formed in Lawrence, Kansas in 1997 by Josh Berwanger, James David, Christian Jankowski, Adrianne Verhoeven and Justin Roelofs. The Anniversary was the solidification of a line-up that had been in flux for a year. After two years of playing shows across with the Midwest with bands that included The Get Up Kids, Braid and Superchunk, The Anniversary signed to Vagrant Records.

Originally perceived as a poppy, keyboard-driven emo band with the release of their debut album Designing a Nervous Breakdown in 2000, they developed a stronger, classic rock-influenced sound with the release of a split CD with Superdrag in 2001 and their second full length, 2002’s Your Majesty. After touring heavily throughout 2002 and 2003, The Anniversary began demoing tracks for what would be their third full length. But four years of constant touring and personal strains within the group led to the band’s demise in early 2004.

Four and a half years after their breakup, Devil on Our Side — a compilation of b-sides and unreleased tracks — was released by Vagrant Records.