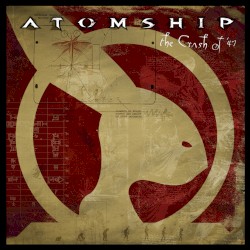 Atomship (formerly known as Watership Down and AtomshipDown) is a four-piece alternative metal band currently composed of Joey Culver, Chad Kent, Roy Williams, and Jared Slade (brother of Nathan Slade) best known for their 2004 single "Pencil Fight". Nathan Slade was the band’s original guitarist and song writer until his tragic death in December 2009. The band was known as Watership Down in 2002, before changing their name due to copyright to Atomship that year. Due to original vocalist Derek Pardoe’s anxiety, Joey Culver took over his place as lead singer, and for the recording of their debut album The Crash of ’47, released in 2004. Atomship was later dropped from Wind-Up Records due to the betrayal of Joey Culver as he teamed up with the producer to go solo. This led to the band’s disbandment later that year. The original band members briefly reunited in 2017 with Jared Slade and performed several local shows In 2006, Atomship reformed as AtomshipDown. In 2010, AtomshipDown reverted their name back to Watership Down. In 2017, the band reformed Atomship with vocalist Joey Culver.