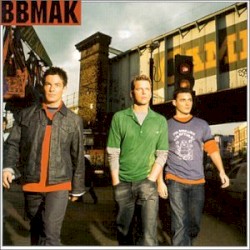 BBMak are an English pop group consisting of Mark Barry, Christian Burns and Stephen McNally. Formed in Liverpool in 1996, they sold over three million albums worldwide between 1999 and 2003. The band first achieved success when their single "Back Here" gained popularity in radio stations in Asia and they later signed with Hollywood Records in the U.S. The band reworked their debut album Sooner or Later for an American release in 2000, and the album charted at number 38 on the Billboard 200 chart with "Back Here" becoming a top 20 hit. BBMak’s success in the American market helped the band finally break through in their home country.

In 2002, the group released their second album Into Your Head which charted at number 25 on the Billboard albums chart. In 2003, the group dissolved as each member went on to pursue solo careers. BBMak reunited in 2018 after a 15-year absence. They recorded and released a third studio album, Powerstation (2019).