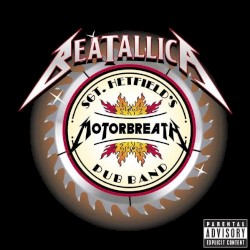 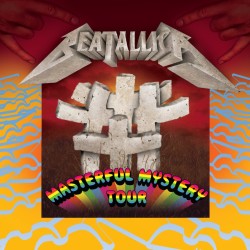 Beatallica is a mash-up band that plays music made from combinations of songs of the Beatles and Metallica. A Beatallica song is typically a blend of a Beatles song and a Metallica song with a related title (e.g. "The Thing That Should Not Let It Be", combining The Beatles’ "Let It Be" and Metallica’s "The Thing That Should Not Be" or "And Justice for All My Loving" combining Metallica’s "And Justice for All" and the Beatles’ "All My Loving"), though sometimes just a Beatles song will be used as a basis with modified lyrics. The lyrics slip back and forth between the two songs, or occasionally neither, in lieu of original lyrics comically referencing Metallica, heavy metal music, or the heavy metal community. While the scansion and melody are usually Beatles-based, the music is played metal style with some Metallica riffs and solos thrown in. Consistent quirks made in the lyrics also criticize glam metal much in the fashion that thrash metal fans would do, as well as many references to blood. Their version of "I Want to Hold Your Hand" called "I Want to Choke Your Band", is an example of their criticism towards glam metal.

Although facing some misunderstandings in the media, members of Metallica itself have repeatedly praised the comedic styling of the group. For example, Kirk Hammett has publicly remarked point-blank, "I think it’s cool," and, "It’s just fun for me." James Hetfield and Lars Ulrich have also been friendly with the band.