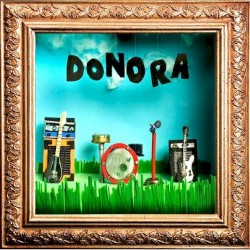 Donora is an American indie pop/rock/shoegaze band based in Pittsburgh, Pennsylvania. They first gained visibility in 2006 as semifinalists in the contest, "Calling All Bands", sponsored by MySpace and Verizon Wireless, for their song "She’s Just a Girl". The band had music included on the MTV series Engaged and Underage, Cribs, and Teen Wolf, as well as the direct-to-video comedy Lower Learning, starring Eva Longoria and Jason Biggs.The trio is composed of drummer Jake Hanner, his younger sister, vocalist/guitarist Casey Hanner, and bassist Jake Churton. The band released their debut album, Donora, in December 2008 on the Pittsburgh-based independent record label Rostrum Records, and received regular airplay on the adult album alternative radio station WYEP-FM. Jake and Casey Hanner are the children of country musician and record producer Dave Hanner, from the country-rock duo Corbin/Hanner.The band is named after Donora, Pennsylvania. Bethany Hanner, the wife of drummer Jake, saw a road sign for the town and suggested it as the band’s name, although the band is from the Gibsonia section of Richland Township in Pittsburgh’s North Hills. The band had never been to the town until they performed there as part of a town celebration.The band released their second album, Boyfriends, Girlfriends, in 2011, followed by their Play Nice EP in 2013.