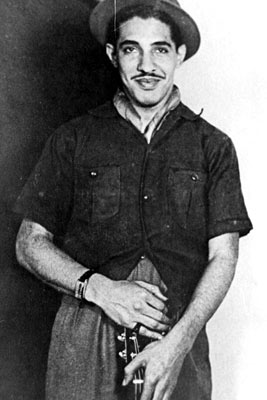 Dorival Caymmi (Brazilian Portuguese: [doriˈvaw kaˈĩmi]; April 30, 1914 – August 16, 2008) was a Brazilian singer, songwriter, actor, and painter active for more than 70 years beginning in 1933. He contributed to the birth of Brazil’s bossa nova movement, and several of his samba pieces, such as "Samba da Minha Terra", "Doralice" and "Saudade da Bahia", have become staples of música popular brasileira. Equally notable are his ballads celebrating the fishermen and women of Bahia, including "Promessa de Pescador", "O Que É Que a Baiana Tem?", and "Milagre". Caymmi composed about 100 songs in his lifetime, and many of his works are now considered to be Brazilian classics. Both Brazilian and non-Brazilian musicians have covered his songs.

Ben Ratliff of The New York Times wrote that Caymmi was "perhaps second only to Antônio Carlos Jobim in ’establishing a songbook of [the 20th] century’s Brazilian identity.’" Throughout his career, his music about the people and culture of Bahia influenced Brazil’s image in the eyes of both Brazilians and foreigners. Caymmi was married to Brazilian singer Stella Maris for 68 years, and the couple’s children, Dori, Danilo, and Nana, are also prominent musicians. Each debuted professionally by accompanying Caymmi onstage and in recordings. In 2014, Caymmi’s granddaughter Alice also began a musical career.