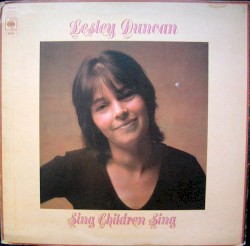 Lesley Duncan (married name Lesley Cox; 12 August 1943 – 12 March 2010) was an English singer-songwriter, best known for her work during the 1970s. She received much airplay on British radio stations such as BBC Radio 1 and BBC Radio 2, but never achieved great commercial success, in part because of her unwillingness to chase stardom, as well as crippling stage fright.