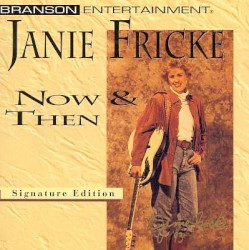 Jane Marie Fricke ( FRIK-ee; December 19, 1947) is an American country music singer, best remembered for a series of country music hits released from the late 1970s to the mid-1980s.

Fricke was one of the most popular female country singers of the 1980s, producing a string of hits and proving herself a versatile vocalist with a particular flair for ballads.

She won the Country Music Association’s "Female Vocalist of the Year" awards in 1982 and 1983.