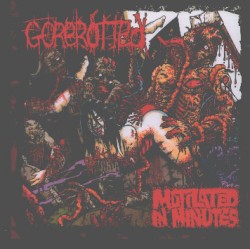 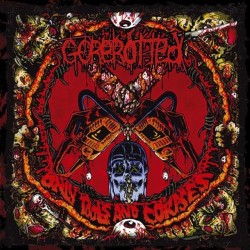 Gorerotted were an English death metal band formed in 1997 which split up in January 2008 and reformed with new members as The Rotted. Gorerotted’s lyrics and song titles were largely inspired by horror films and serial killers. The band’s song titles often incorporated humorous rhymes or puns such as "Cut, Gut, Beaten, Eaten", "Put Your Bits in a Concrete Mix", and "Only Tools and Corpses", a pun on the popular British sitcom, Only Fools and Horses, the latter beginning with a similar introductory drumbeat to the sitcom’s theme music.

Musically, Gorerotted employed a distinctive dual vocal style. Originally with Ben McCrow delivering a deep, death growl-style, and Mr. Gore (Jason Merle) providing contrast to this with a high-pitched yelling and screaming. When Wilson joined as the band’s bass player on the album Only Tools and Corpses he also added to the vocals by delivering high-pitched growls and additional screams, thus the band had three different voices going at times. After Mr. Gore’s departure in 2004, Wilson took over his vocal parts in the older songs. The guitar riffs are often fast and technical, with the bass usually doubling these parts. Both the guitars and the bass are tuned down one whole-step (guitars are tuned to D), to achieve a heavier sound. The drumming is extremely fast, often making use of blast beats and double bass.

Ben Goreskin and Tim Carley renamed the band The Rotted in 2008 when their new material took on more of a Death metal/Punk vibe and continued to tour and record until splitting in 2014. Ben now co-fronts Grindcore/Hardcore punk/Crust punk pioneers Extreme Noise Terror.