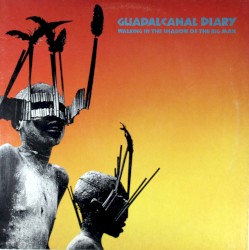 Guadalcanal Diary was an American alternative jangle pop group. They originated in Marietta, Georgia, a suburb of Atlanta, but they were often billed as being "from Athens, Georgia," in the early 1980s. The band formed in 1981 and disbanded in 1989. They reformed in 1997, but never recorded any new material. After going on hiatus in 2000, Guadalcanal Diary temporarily reunited for a second time in 2011 for Athfest, where they celebrated their 30th anniversary.