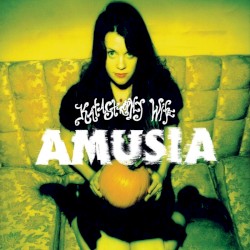 Katastrophy Wife is an American rock band formed by Kat Bjelland and her former husband Glen Mattson in 1998. Bjelland also fronted the punk rock band Babes in Toyland between 1987 and 2001. The band currently consists of Bjelland on lead vocals and guitar and her boyfriend, Adrian Johnson, on drums. The band released two albums, Amusia (2001) and All Kneel (2004). A third album was due for release in 2008, but, as of 2020, has yet to surface. In May 2014, a 10th anniversary reissue of All Kneel was released as part of Record Store Day. Kat Bjelland later joined fellow Babes in Toyland band member Lori Barbero and new bass player, Clara Salyer in a reunion tour.