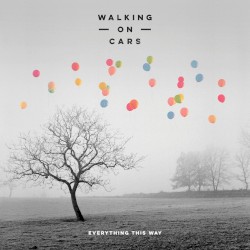 Walking on Cars are a four-piece Irish rock band composed of Patrick Sheehy (singer/lyricist), Sorcha Durham (pianist), Paul Flannery (bass guitarist) and Evan Hadnett (drummer). Their debut single "Catch Me If You Can", released in 2012, went to No. 1 on the Irish iTunes chart. The band released their debut EP, As We Fly South, in 2013, and a second one, Hand in Hand, in (2014), together with the accompanying single "Always Be with You". Their next single, "Speeding Cars", came out on 30 October 2015. Following the international success of the single, the band released their debut album Everything This Way on 29 January 2016, which peaked at No.1 in Ireland. On 12 April 2019 the band released their second album ’Colours’.