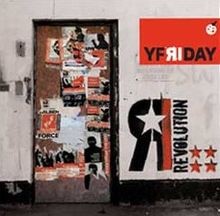 YFriday were a British Christian rock and worship band from Newcastle upon Tyne. From their beginning in 1994 until they split in 2010, they gained popularity amongst Christian music fans around the world, particularly in the United Kingdom. In 2010, YFriday announced that they were commencing their final months before disbanding later in the same year, after releasing a number of successful albums.