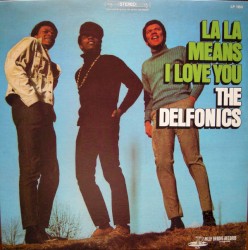 The Delfonics are an American R&B/soul vocal group from Philadelphia, Pennsylvania, United States. The Delfonics were most popular in the late 1960s and early 1970s. Their most notable hits include "La-La (Means I Love You)", "Didn’t I (Blow Your Mind This Time)", "Break Your Promise", "I’m Sorry", and "Ready or Not Here I Come (Can’t Hide from Love)". Their hit songs were primarily written/composed and produced by lead vocalist and founding member William "Poogie" Hart and the musical instrumentation was arranged/conducted by songwriter and producer Thom Bell.

Their songs have been used in film soundtracks, including Quentin Tarantino’s 1997 movie Jackie Brown, in which "La-La (Means I Love You)" and "Didn’t I (Blow Your Mind This Time)" underscore the pivotal relationship between the characters played by Pam Grier and Robert Forster. Their songs "Ready or Not Here I Come (Can’t Hide from Love)" and "Funny Feeling" were used in the video game Grand Theft Auto V on the fictional radio station The Lowdown 91.1.