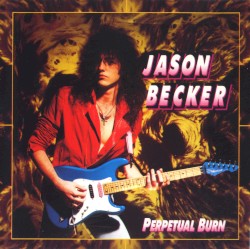 Jason Eli Becker (born July 22, 1969) is an American virtuoso musician, songwriter and composer. At the age of 16, he became part of the Shrapnel Records-produced duo Cacophony with his friend Marty Friedman. They released the albums Speed Metal Symphony in 1987 and Go Off! in 1988. Cacophony disbanded in 1989 and Becker began doing solo work, having released his first album Perpetual Burn in 1988, also through Shrapnel. He later joined David Lee Roth’s band and recorded one album with him, A Little Ain’t Enough.

Becker’s performing career was cut short by amyotrophic lateral sclerosis (ALS). In 1996, Becker lost the ability to speak, and he now communicates with his eyes via a system developed by his father. He continues to compose with the aid of a computer and has since released Collection in 2008 and Triumphant Hearts in 2018, as well as various compilations.