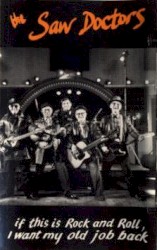 The Saw Doctors are an Irish rock band. Formed in 1986 in Tuam, County Galway, they have achieved eighteen Top 30 singles in the Republic of Ireland including three number ones. Their first number one, "I Useta Lover," topped the Irish charts for nine consecutive weeks in 1990 and still holds the record for the country’s all-time biggest-selling single. Renowned for their live performances, the band has a cult following, especially in Ireland, the United Kingdom, and the United States. On 15 February 2008, they received a Lifetime Achievement Award at the Meteor Ireland Music Awards.