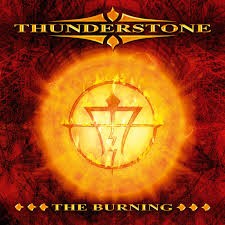 Thunderstone is a power metal band from Helsinki, Finland. The band was formed in 2000 by guitarist Nino Laurenne, and the line-up became full the following year. After the release of the band’s self-titled debut album, Thunderstone, the band toured Europe supporting Stratovarius and Symphony X. Thunderstone released the first four of their albums through Nuclear Blast; however, their album Dirt Metal was released in October 2009 under Sony Music.