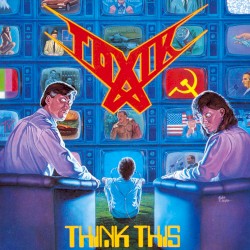 Toxik is an American thrash metal band formed in 1985 Peekskill, New York. After breaking up for the first time in 1992 and briefly reuniting in 2007, the band reformed once again in 2013. Toxik has gone through several lineup changes over the years, leaving guitarist Josh Christian as the only constant member. The band has released two studio albums to date, World Circus (1987) and Think This (1989), and they are currently working on a third record.