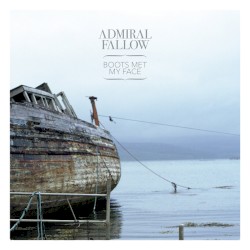 Admiral Fallow are a Scottish musical group formed in 2007 by singer-songwriter Louis Abbott and based in Glasgow. They were originally named Brother Louis Collective. The band’s first album, Boots Met My Face, was released worldwide in 2011. Their song "Squealing Pigs" was used on NBC’s Chuck and was performed live on the BBC’s Hogmanay Live 2011.