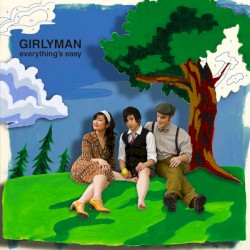 Girlyman was an American folk-rock band formerly based in Brooklyn, New York City, New York, later based in Atlanta, Georgia. Its self-released debut album, Remember Who I Am, sold 5,000 copies before it was re-released by Daemon Records, the independent record label run by Amy Ray of the Indigo Girls. Girlyman described its musical style as "harmony-driven gender pop" and "leading-edge three-part harmony folk-pop," and enjoyed a strong following in the gay community.

In late 2012, Girlyman took a hiatus from touring. Greenstein and Borofsky both began work on solo albums, while Muramatsu, Jones, and Borofsky announced they had formed a new group called Django Jones. Greenstein’s album One True Thing and Borofsky’s Every Wish were released in 2013.

On September 11, 2013, Muramatsu announced that Girlyman had officially disbanded. In 2014, Django Jones released the children’s album D is for Django, and Greenstein announced a new musical act, Mouths of Babes, with her partner Ingrid Elizabeth.